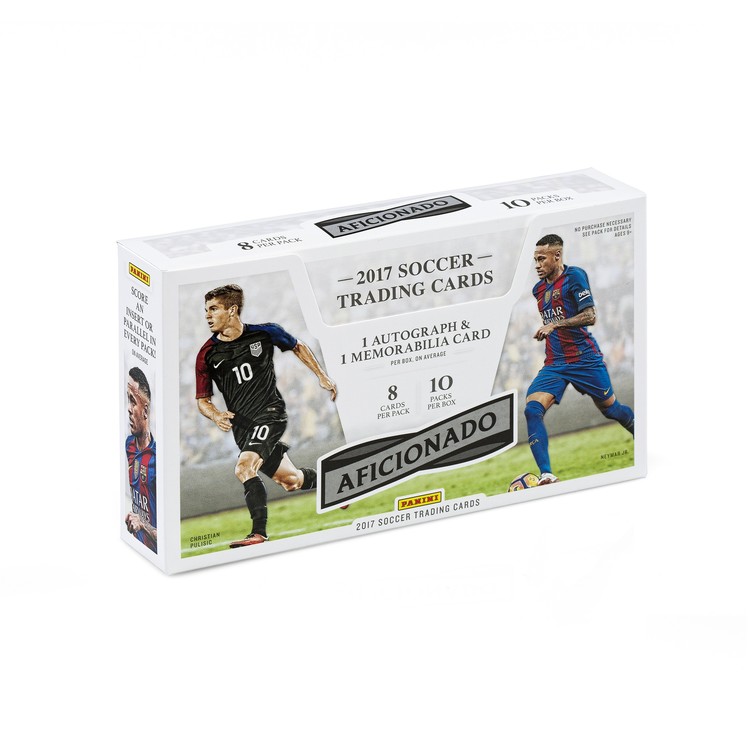 Each Box contains One Autograph, One Memorabilia Card, Five Inserts, and 10 Parallels!

Aficionado, one of Panini's newest brands, comes to the soccer hobby with the release of 2016-17 Aficionado Soccer. The collection includes soccer's best and brightest stars shown in action with their club team and/or their national team.

Look for the best players in the game today in a variety of special inserts such as Magic Numbers, Power Surge, Craftwork, and Meteor! Also find notable soccer stars of the past in Heroes.

Chase unique hard-to-pull cards in Aficionado! The Forza! insert showcases goal celebration photography and falls one-per-case, on average! Also be on the hunt for the ultra-rare First Kick parallel of the base set!

BASE SET: The Aficionado base set features a unique design that includes both a close-up photo and an action shot of each player.

AUTHENTICS PRIME: Look for sequentially numbered memorabilia cards of the world's best players in Authentics and Dual Authentics, as well as a Prime parallel edition of both. Featured players include Diego Costa, Lionel Messi, Arda Turan, Jamie Vardy, Clint Dempsey, and many more!

POWER SURGE ARTIST'S PROOF: Power Surge highlights footballers who play with intensity and power such as Pierre-Emerick Aubameyang, Arturo Vidal, Paul Pogba, and Sergio Aguero, among others. Watch for Artist's Proof parallel editions, some numbered to 99 (Red), 49 (Bronze), and 1 (Gold)!

FORZA!: Collect 10 of the most lethal offensive players in the game today in the very special Forza! insert. This rare card falls one-per-case, on average!