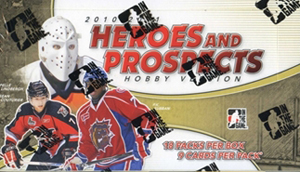 There are also 5 different Non-Memorabilia Insert sets inserted 1:6 packs. The He Shoots-He Scores Redemption program is back! Collectors can redeem 200 points for limited Game-Used Memorabilia cards only available for this program.

Non-Memorabilia Inserts (1:6 packs)
This year there are 100 cards in the Non-Memorabilia insert set to collector this year. Calder Cup Champions, Memorial Cup Champions, Class of 2011 (Redemption for game-used memorabilia cards of first round draft picks), 75th Anniversary of the AHL and 100 Years of Card Collecting!

Authentic Autograph Cards (1:8 packs)
Over 125 Autograph cards to collect from the CHL, AHL, International Prospects and
an impressive list of Heroes.

*Each pack Contains 8 cards Plus one memorabilia or one HSHS Redemption card (expired on December 31, 2011)

Note:-Stated odds reflect average of entire production run. These ratios are not guaranteed to exist within an individual box or case.