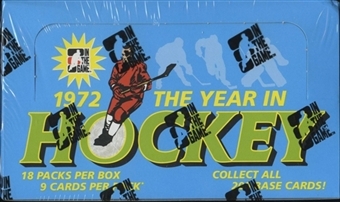 Look to pull (1) Game-Used Memorabilia and (1) Autographed card per box (on average)!

CONTENT HIGHLIGHTS: (insert ratios are based on the entire production run and are not guaranteed in any individual box or case)
- 1 Authentic Game-Used Memorabilia Card Per 18 Packs!
- 1 Autograph Card Per 6 Packs!
- 1 Non-Memorabilia Insert Card In Every 8 Packs!

In The Game celebrates 1972 - The Year In Hockey! Taking you back to a year that hockey fans and hockey card collectors will never forget. This is the year that collectors selected in a poll carried out earlier this year by In The Game.

The checklist of Authentic Autograph Cards is outstanding as In The Game found players from around the world to sign cards for this product. Yes, the autographs are hard-signed!

1972 The Year In Hockey product is even more exciting with the addition of Cut Signature Cards commemorating 1972 The Year in Sports, Music, Television, Movies and Politics. Were you around when the top television show was All In The Family, the top movie was The Godfather, Pierre Elliot Trudeau was the Prime Minister, Sammy Davis Jr. sang The Candyman and Mark Spitz won seven gold medals at the Olympics?

1972 - The Year In Hockey is loaded with Authentic Game-Used Memorabilia Cards both unsigned and signed versions!

There will also be silver, gold and black Autographed Authentic Game-Used Memorabilia Cards. These cards will also be clearly marked by the foil stamp on the cards.

Autograph Cards
Over 150 Autographs to collect featuring players from the NHL, WHA and Summit Series! There is one Authentic Autograph card in every 8 packs!