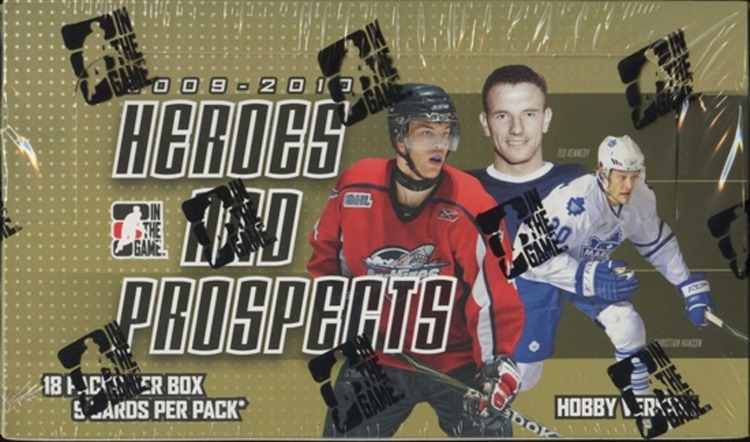 Look to pull (2) Game-Used Memorabilia cards and (2) Autographed cards per box (on average)!BASE CARDSSince the 2004-05 season, Heroes and Prospects has become

Look to pull (2) Game-Used Memorabilia cards and (2) Autographed cards per box (on average)!

BASE CARDS
Since the 2004-05 season, Heroes and Prospects has become a hobby favorite. Many of hockey's brightest young stars have been a part of this popular release. Sidney Crosby, Evgeni Malkin, Alex Ovechkin, Patrick Kane and John Tavares all got their hockey trading card start in Heroes and Prospects.

For the 2009-10 season, In The Game brings collectors a whole new level with an all-new designed base set featuring 150 cards. The best from the Canadian Hockey League and the American Hockey League will be a part of this product. Subsets include; CHL Prospects, AHL Prospects, Heroes, International Prospects and AHL Grads. Look for big names like Cody Hodgson, Nikita Filatov and Eric Staal in addition to many other popular young stars.

In The Game has also created two new subsets for Heroes and Prospects - CHL Rookies and AHL Rookies! There will be 10 cards for each subset giving collectors an opportunity to obtain the first cards for CHL Rookies such as Shane McColgan and Daniel Cattenacci in addition to seeing former junior stars such as P.K. Subban and Logan Couture in their AHL uniforms.

AUTOGRAPH CARDS
Getting a player's signature before he hits the NHL is a thrill for many collectors and In The Game brings this excitement home with its Autograph collection. The hottest stars of the CHL and AHL are included along with some International Prospects, Heroes and AHL Grads.

Collectors can expect to find an average of two Autograph cards* per box. With over 100 players available, it will be a real challenge to collect them all!

NON-MEMORABILIA INSERTS
Each edition of Heroes and Prospects has included some of the most exciting non-memorabilia insert cards in the hobby and this season will see the debut of some amazing new concepts along with the return of some old favorites.

New to the Heroes and Prospects non-memorabilia insert lineup are 2010 Draft Picks, including an exciting redemption element and AHL All-Star Classic Legends.

The final of the non-memorabilia inserts this season will be the Enforcers insert set. The AHL's best pugilists will be depicted in battle and these cards are sure to generate a lot of buzz among collectors.

GAME-USED MEMORABILIA CARDS
Heroes and Prospects built its reputation on delivering colorful and appealing pieces of authentic game-used memorabilia in every release. The 2009-10 edition is no exception, as many hobby favorites return and some new twists are added to the mix - including Autograph versions of many of the game-used memorabilia insert sets. There will be an average of two* Game-Used Memorabilia cards per box making the odds of pulling one greater than ever!

One of the most exciting inserts sets is the Game-Used Jersey, Game-Used Emblem and Game-Used Number collections. This season, each of these cards will come in Black, Silver foil and Gold foil variations and many of the players in all three of these sets will also have a limited Autograph version.

Each year, the CHL holds major events to showcase their talent and In The Game has acquired jerseys from these games to ensure that collectors can obtain jerseys that have historical significance. This season, look for the SUBWAY SUPER SERIES and Top Prospects Game. Each SUBWAY SUPER SERIES game-used memorabilia card comes with Black, Silver or Gold foil stamping.

The Top Prospects Game jerseys will feature jumbo pieces from jerseys, numbers and emblems that were worn in the annual event that gives pro scouts a chance to scout the players that are eligible for the NHL Entry Draft. Like the other sets listed above, each card will feature either Black, Silver foil or Gold foil and some players will have an Auto variation.

After last making an appearance in 2005-06, AHL Grads return to the Heroes and Prospects lineup and there are a number of players in this collection who were prospects at the time including Eric Staal and Shea Weber. Also back in 2009-10 are Prospects Combos - which feature two prospects.

Gloves Are Off is back for another season as well. This collection takes a piece of game-used glove from some of the hottest young stars and brings it home to collectors.

One of the most collectable inserts in Heroes and Prospects is the Complete Jersey insert set that feature pieces of a game-used jersey, number, emblem and tie-down from many hot prospects. They're back again this season.

Some lucky collectors will also pull a Complete Logo card featuring the entire league logo from an AHL or CHL player's game-used jersey. Limited to just one copy each, Complete Logo cards have become a cornerstone of many collections and are sure to create excitement when they are pulled.

Finally, we come to In The Game's famous Made To Order program. Last season, the company brought this concept to their Heroes and Prospects brand and it's back again this season. Some lucky collectors will be able to have a card made of one of their favorite players that is uniquely theirs. It's the ultimate one-of-one card and you'll want to add one to your collection!

The 2009-10 edition of Heroes and Prospects from In The Game is set for a January 2010 release with eight cards plus a He Shoots - He Scores decoy in every pack and 18 packs per box, collectors can expect to pull an average of two* Autograph cards along with two* Game-Used Memorabilia as well. 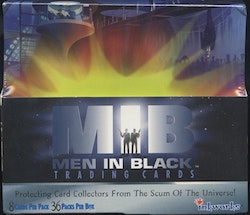