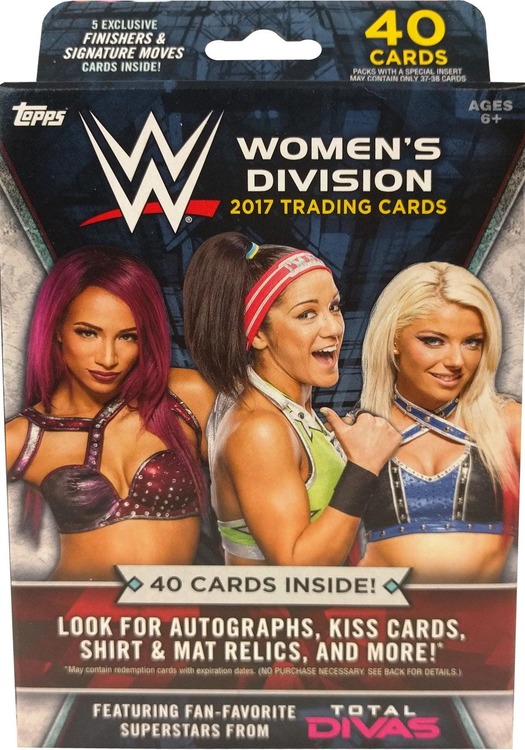 After the success of last years WWE Divas Revolution, Topps is back with a set dedicated to the women of WWE. The cards feature dynamic designs, a wide range of autographs and relic cards that will be cornerstones of any collection.

The Finishers & Signature Moves insert can be found in the Hanger Boxes only. It also includes Silver, Blue, Gold and Red parallels. Relics Kiss Cards Ten different women of WWE created Kiss Cards for 2017 Topps WWE Womens Division, with the addition of hard-to-find autographed parallels. Some of the wrestlers in the set include current stars such as Alicia Fox and Natalya as well as WWE Legend Trish Stratus. Shirt Relics These cards feature shirts worn by the fabulous women of WWE. Wrestlers included in this set feature Alexa Bliss, Bayley, Charlotte Flair, Naomi and other fan favorites. Mat Relics WWE fans can own a piece of a mat that the women competed on.

There are several mat relic cards included for WWE and NXT wrestlers, and each relic is labeled from the event that it was used in. There are also rare autographed parallels. Retired Womens Division Championship Commemorative Cards Remember all that is great of the women in WWE history with this special commemorative cards. Wrestlers on the cards include current day stars such a Nikki Bella as well Legends such as Beth Phoenix.