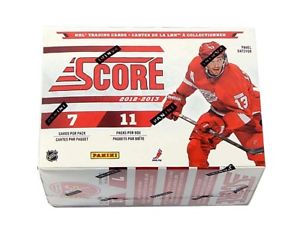 2012-13 Score Hockey sees the return of the venerable value-laden early release aimed at set builders, those on a budget and hockey fans starved for a preview of the forthcoming season. Boasting several inserts, random inserts and a clean base set, 2012-13 Score Hockey touches on the brand's roots while offering some new spins.

The 2012-13 Score base set features crisp white borders. They leave lots of space for an action photo in the middle of the card front. Player info includes name, team logo and their conference. Position is absent. Hot Rookies is a short-printed subset highlighting players who debuted late in the 2011-12 season. An added background and flaming font make these rookie cards a lot more lively than the regular base cards. Inserted one per pack, Gold Rush parallels have a hint of color along the sides of the borders. Hot Rookies Gold Rush cards fall one per box.

Although 2012-13 Score Hockey is a low-end release, that doesn't mean its completely without hits. Score Signatures don't fall one per box, but they should be plentiful enough to satisfy cardboard treasure hunters and provide a bonus for pack busters.

The Franchise Retro is a retail-exclusive set that looks back on the NHL's all-time greats from Original Six teams. The green borders are reminiscent of the similar 1992 Score Baseball insert set with Mickey Mantle, Carl Yastrzemski and Stan Musial. The Franchise Retro cards fall three per retail box. Collectors can also look for The Franchise Retro Autographs from the likes of Gordie Howe and Bobby Hull.