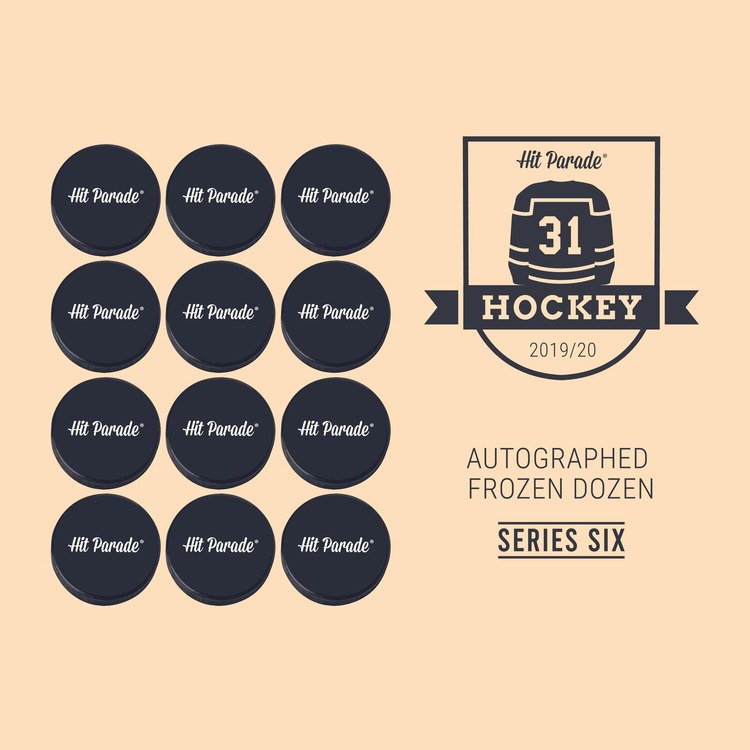 Are you looking for the newest and most exciting way to collect amazing autographed pucks from today's superstars and legends from the NHL? Welcome to Hit Parade! The Hit Parade team travels all across North America conducting hundreds of autograph signings every year with your favorite players. Each box will contain TWELVE autographed hockey pucks. These signed collectible pucks can be official game or autograph version pucks. Every autographed puck is authenticated by only the most credible companies in the autographed collectible industry. Your signed puck will come with documented authentication from companies such as Upper Deck, Fanatics, Frameworth, Leaf, Steiner, PSA/DNA, AJ's Sportsworld, Tristar, Dave & Adam's, Beckett, Tristar, Frozen Pond, CoJo Sports, James Spence, Rich Altman's Hollywood Collectibles or Personalized Player Holograms.

This incredible product line offers you the very best selection of amazing players. Hit Parade also gives you the best chance to get a monster autographed puck since there is one each box in each series! Stop trying to chase down the big hits in products that have giant box runs because the odds are stacked against you. Another unique feature of the Hit Parade Autographed Memorabilia line is our passion for adding inscriptions. Whether it is an "HOF", a colorful nickname, or some career stats you will not find any product out there with as many inscriptions included as Hit Parade.

Take a look at some of the other stars, legends and Hall of Famers in Series #6: